What Ever Happened To Four-Finger Shotguns?

Four-Finger Shotguns is on hiatus, as all good podcasts sometimes do.

Currently, Zip! Bang! Wow! is focused on creating media that tells stories, whether that be bathroom jokes or epic poetry: We like both. Four-Finger Shotguns started out as a learning experiment and a “first over the wall” excursion. We wanted to show people it was possible, but we also wanted to learn what was possible; not from a theoretical standpoint, but to get our hands dirty by rolling around in the muck.

There was no way we were going to be able to lead other people to the promised land, if we hadn’t been there at least once ourselves. Four-Finger Shotguns served a whole lot of purposes for us, but showing that a nerdy, panic-stricken, socially-awkward newcomer could host a podcast and conduct interviews was the most important one.

We learned quite a bit about producing media for other people and that was the real payoff. It’s one thing to say to someone, “hey, try this, maybe it’ll work…” and quite another to say, “when I was faced with this problem, it really helped me to…”

So, now we have valuable experience that we can share with people.

Does that mean Four-Finger Shotguns is over, kaput? “But I got a tattoo!”

Once Jonnie started doing interviews, it became really clear to us that one important message kept being repeated. During the brightest economic times in Seattle in decades, just being skilled with technology wasn’t a guarantee of success. Plenty of talented people were having a difficult time finding work, and they almost all seemed to be people of color, women, trans people, mentally ill people, previously incarcerated people.

People on the margins.

The answer is simple: take the people on the margins and put them in the middle. Presto! Problem solved.

Easier said than done, however.

Everyone wants to be comfortable and be with people who make them feel comfortable.

We’ve heard a lot of guff — and we’ve made our share of jokes — about “typical Seattle liberals” who proudly talk (and retweet) the talk when it comes to social justice, but epic fail when it comes to walking the walk.

It’s not entirely unfair to say, but we think it’s only really a Seattle “problem” in that most other places people don’t pretend to care to do the right thing in the first place, so expectations are low.

Seattle’s biggest problem is that we believe that life could be better, for everyone, but we just don’t want to do all the hard work — and most important of all, we don’t want to give up any of what we already have — so someone else can live a life as nice as ours.

We talk about the concept of white privilege and it’s a real thing, but it’s tough for white people who struggle to get by to believe they have privilege. Sometimes a better word might just be convenience.

Culture Fit is a living example of that convenience. It’s not intended to cause bad outcomes, even though its clear intent is to standardize a culture. We imagine that someday people will look back on practices like this and wonder what we were thinking.

Culture Fit is the opposite of Inclusion and what we need to be practicing today is Cultural Inclusion.

As Jessica Burns said, “Diversity is being let into the club, Inclusion is being asked to dance.”

We love Seattle with all our heart. Jonnie has wanted to live here since they read their first Tom Robbins novel.

When we came here in 1991, Capitol Hill may have been the gay neighborhood, but that didn’t mean it was ever safe to walk around alone at night. Seattle has always been a little bit behind the times but our estimation of how far ahead of the pack we are has always been mostly in our own minds.

That’s not a criticism, though.

From the first native people who crossed the ice-bridge of the Bering Sea to settle this continent, to the Gold Rush in the 1890s, to this generation’s Tech Rush: the Pacific Northwest has always been a place on the frontier where people with big dreams would come to make their lives better.

We are at a crossroads now.

Is Seattle going to live up to its name? We are, after all, named after Chief Sealth, who welcomed and accommodated new people and became personal friends with “Doc” Maynard, the guy who founded Pioneer Square.

And what about “Doc”? Well, it’s said he could have done better in life if it weren’t for his insistence on treating the native people with a modicum of respect. See, he didn’t pass the Culture Fit test with the other founders.

Are we going to continue circling that same drain? Only trusting people who look and sound and think like us?

Because that’s not why Jonnie got into tech.

Jonnie got into tech because of Cyberpunk novels and movies, that told the story of a struggle between corporate interests that only sought to dominate and control; and the people who fought against them, despite their many differences.

Well, here we are in the mother-fucking future and they nailed the megacorp dominating the world bit.

The scrappy rebels, though, we keep failing to work together.

There’s no great conspiracy to keep us from doing this. It’s entirely on us.

We keep driving our cars, we keep working for big corporations, we keep eating garbage food, all because it’s convenient. Because that convenience takes off just enough pressure to make us feel like we’re doing pretty good for ourselves.

There’s nothing wrong with convenience. It’s a wonderful thing.

We only meet our immediate needs and ignore our long term health. As people and as a society.

And there is no podcast that can fix that.

And that depresses us to no end.

So, Four-Finger Shotguns is on hiatus. Jonnie is spending their time learning Python and Flask, re-focusing back to iOS and Mac OS X development with Swift, and video and audio production services for clients that have more holistic plans for development.

And Jonnie rides their bike. A lot.

And Jonnie continues to heal from the neuro-degenerative chronic illness that made Jonnie unable to work for so long.

And Jonnie will continue to reach out to people who are different than them and learn how to integrate our life into theirs and make room for them in ours.

Seattle needs more of that. Thanks Four-Finger Shotguns. 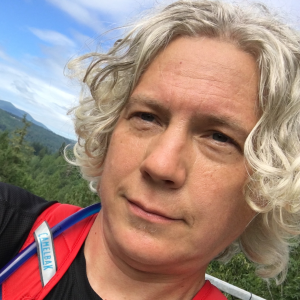